As I've mentioned previously, in addition to the 'Art Project' (which produces Passionfruit Magazine), this year we're also running the 'Music Project'. This project is designed to work with students who are musically very able, but who have struggled to gain the literacy and numeracy qualifications necessary for them to move into tertiary study. This group have a couple of timetable lines allocated to music and integrated curriculum learning, as well as being in an English class on their own. Most are also in an NCEA Level 1 Photography and Design class that I teach.

Because of the dense nature of many Visual Arts texts (often written in International Art English, as it has sometimes been termed!), I put quite a bit of effort into building the students' capacity for unpacking complex written texts. As you might imagine, this has brought up a few challenges for a group of students who aren't exactly lovers of written texts, let alone complex ones! 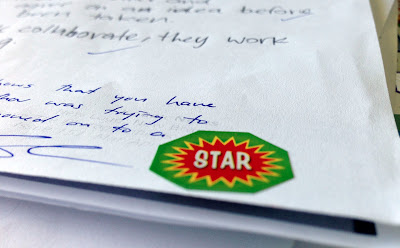 One of the major benefits of having a group of teachers focused on working with the same students is that we've been able to tackle the same challenges from different angles. A recent case in point was the English specialist (Laura Green) being able to use some English class time working with a text unpacking exercise that I'd set the students for homework. As a result, five of the of the six students who had barely attempted their initial text unpacking assessment handed the most recent one in complete, in most cases the day after they'd been given it, despite the deadline being a week away!

This may seem a small step in some ways, but considering the academic histories of these students it's a success I'm more than willing to celebrate!
Posted by Sam Cunnane at 1:38 pm